“Only a Buddha can transmit to a Buddha.”  – The Lotus Sutra

When Bucknell friends of mine learned I had been practicing meditation with a Zen teacher in a monastery, some thought I had joined a cult, others thought that I was just weird.  They distanced themselves from me in their own ways, and I from them.  I found something that addressed the suffering in my heart.  There was no love lost in those relationships.

I walked joyfully across the well manicured grass lawn on the way to Rooke Chapel on a warm sunny mid afternoon day in May in central Pennsylvania.  The year was 1994, a year before I was to graduate from college.  Everything was a lush green.  The red of the bricks on the academic buildings glowed.  I approached the back door of Rooke Chapel with anticipation, and entered a room set aside for meditation.  The space had a very tall ceiling, at least 15 feet, and paintings of donors on the walls.  Though I had been at Bucknell for three years, I had never entered the meditation chapel.  There was a piano to one side and stacked chairs lined the walls on two sides.  My eyes met a woman with short white hair, a full and white face, wearing a brown and black gown, hunched over and pulling round blue cushions out of a red duffle bag and arranging them in a circle on the carpeted floor.

She saw me, stood upright, and introduced herself while continuing to arrange the cushions in a circle.  “Hi.  My name is Dai-En, as in dyin’ to meet you.’”  This was my first introduction to a Zen Buddhist priest.

I felt immediately welcomed and at home.  I was so entranced by the robes she wore and the calm and deliberate way that she spoke and did not speak, that I felt like I was eating honey in her presence.  I don’t remember much of what she said to me in that initial encounter, but I do remember two things.

The first was that we read from a book entitled, “Being Nobody, Going Nowhere.”  It had a red cover and an image of a heavy set man wearing grey, rounded shoulders, sitting in the midst of the landscape one would see in a chinese painting.  I couldn’t get past the title: “Being Nobody, Going Nowhere.”  At Bucknell I was being taught by many of my professors to be somebody, and I was preparing to go somewhere in the world, with my education.  What could it mean to “be nobody” and “go nowhere?”  I was being introduced for the first time in an experiential way to the practice of non-doing, and non-being.  Though I had read about this in religion classes, it never occurred to me that this was more than an idea.  Who did I know that actually practiced non-doing?  How is non-doing done? 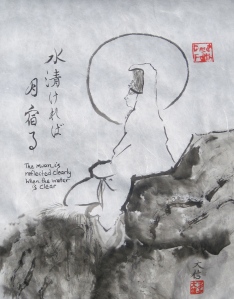 The second thing I remember was that I felt better than I had ever felt without having drunk alcohol or done drugs.  I did not fully understand why because, after all, I had not done anything.  I simply met my teacher and heard her teach Dharma.  “When you first scoop up water from the Susquehanna River, you find a lot of silt swirling around in the glass,” Dai-En Roshi said.  “But what happens if you let that water sit in the glass and come back to it in a couple of hours?  All the silt in the water settles in the bottom and the water is clear on top.  Zazen is like that.  It allows the silt and dust in our mind to settle so that we see clearly.”

From that experience I felt an intuitive sense of a life-path, though I did not know what the outward manifestation would look like.  My heart and mind were brought to rest, and in that resting all of the important questions floating around in my head as to who I was and what I would do were allowed to settle.  They were given permission to remain unanswered.  The meeting of the second Zen ancestor in China, Taiso Eka Daiosho, and his master, Bodaidaruma Daiosho, the Indian sage, was similar to the way I met my teacher.   Taiso Eka asked Bodaidaruma how to relax his mind.  Bodaidaruma responded, “show me your mind and I will relax it for you.”  Eka replied, “When I look for it, I cannot find it.”  Bodhidharma said, “your mind is relaxed.”

Bodaidaruma pointed his disciple in the direction of his own mind.  When Eka went to look for it, he had a deep realization that there was no fixed thing he could call, “my mind.”  In other words, he had an experience of not being separate from anything in the Universe.  His mind was not some entity to be grasped.  In fact, he realized that his mind lacked individual existence.  This experience brought him to a place of peace with himself.  That first meeting with Dai-En Roshi was similar, though I could not put any words on it at that time.

I began attending her meditation classes weekly and began a home practice of zen meditation.  During one of those classes I shared with her my struggles in my search for myself and for God.  She looked at me patiently and with sparks in her eyes and said, “There is Buddha for those who don’t know what Buddha is really.  There is no Buddha for those who know what Buddha is really.”

My intellect could not grasp what she was saying at all, but her words entered my heart nonetheless.  I craved more guidance.  I wanted to know more, to study more.  Dai-En Roshi further told me that in the Soto tradition of Zen the most important question to ask is called, “Genjo Koan.”  A koan is an enigmatic question designed to bring the mind to settle on paradox, rather than to be answered with the head.  Genjo koan is about our life as a whole: what should I do right here, right now, this time around?  This was exactly my question before I met Dai-En Roshi, and instead of answering it, she threw it back on me!  My respect for her increased a hundred fold.  I was not looking for answers outside of myself, and she affirmed my search for that answer without doing me the disservice of answering it for me.  She gave me permission to be okay with having such a question, permission that allowed me to rest with the question and to refrain from coming up with a quick answer.  I realized that it is okay not to know, and yet this not-knowing is only half of the answer.

From the first day I met Dai-En Roshi I began to practice Zen meditation assiduously, mostly by myself.  I wanted to change my life and the way that I viewed things.  I wanted to see things as interdependent.  I knew this would require practice.  Dai-En Roshi told me that, with Zen, others may notice changes in you before you notice them in yourself.  I thought about what she said briefly and then let go of trying to measure change.

To my surprise not too long after I began meditating, a college friend of mine who was on the swim team said, “Eric, you seem different.  You’ve changed.  You seem happier.  What have you been doing?”

Daishin Eric McCabe is a Buddhist monk. He teaches Soto Zen philosophy, mindfulness meditation, yoga, and calligraphy to people of all walks of life and spiritual paths. He was ordained in 2004 and given permission to teach in 2009. He is fully ordained in the Soto Zen tradition and is a recognized teacher both in the Association of Soto Zen Buddhists and in the Soto Zen Buddhist Association. Daishin undertook a 15 year mentorship with Abbess Dai-En Bennage of Mount Equity Zendo, located in rural central Pennsylvania. During this time he trained at various Soto Zen Monasteries in Japan. In France he trained with Venerable Thich Nhat Hanh, practiced in California at Tassajara Zen Mountain Center, and with Rev. Nonin Chowaney at the Nebraska Zen Center. He is a certified hatha Yoga teacher through Integral Yoga. Daishin has four years experience attending the spiritual and emotional needs of patients, family, and staff in a hospital setting, and three years experience giving spiritual direction and counsel to clients with mental health and substance abuse issues. He has ten years experience as a Guest Teacher and speaker at Buddhist meditation retreats, yoga centers, colleges, and multi-faith gatherings. Daishin studied at Bucknell University where he received a BA in Religion and Biology in 1995. He completed 5 units of Clinical Pastoral Education at Wellspan York Hospital in August of 2014, where he worked as a Chaplain in Behavioral Health, and in 2015 was granted by the Board of Chaplaincy Certification Incorporated the equivalent of a Master of Divinity. Prior to chaplaincy he taught meditation and yoga for two years to clients at White Deer Run, a drug and alcohol rehab in central PA. He presently teaches yoga at Broadlawns Medical Center to patients receiving mental health care. Daishin presently resides in Ames, Iowa with his wife and family. View more posts