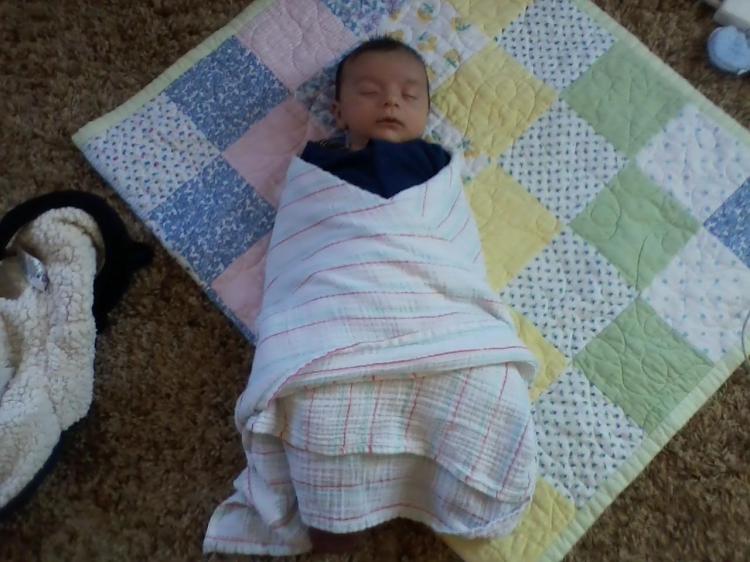 Zen Master Dogen writes that we should practice as though our hair were on fire.  This means we really need to take seriously the impermanence of life and do what we can today to end suffering.  Some days when Malcolm, our newest addition to the family, is crying, it feels like my head is on fire.  I want to do everything I can to put the fire out.  I think there is a natural instinct in parents to want to alleviate the suffering of their children because they feel that suffering so clearly in themselves.  We’ll do almost anything we can to help them to feel happy and calm, not only for them, but for us.  We are constantly on the lookout for what works and what does not.

While there is no one way that works all the time and forever, I’m learning that one possible way to calm an infant down is to swaddle him.  From the outside, this looks like a binding of the child.  His arms can’t move.  When we think about how we would feel as adults if our arms were bound, we would most likely demonstrate our protest, and it is therefore not uncommon to project our protest onto the infant, desiring them to “be free.”

But this swaddling seems to actually calm the child down, assuming they are fed, and washed.  It is said to mimic what it feels like in the womb.  It’s a huge step for a fetus to go from a very constrained place to out in the wide open world.  It’s overwhelming.  It may be the equivalent of an adult trying to go from Earth to outer space, and back to the core mantle of our planet in 3 seconds!  Swaddling is a way to ground the infant, help them to feel safe – similar to the comparatively constrained conditions inside the womb – but also giving them the chance to feel themselves – to feel what it is like to have arms, legs, a head, and a body.  From the infant’s perspective, this feeling of having a body was necessarily different inside the womb, surrounded by liquid.  Now they are in a totally different environment, surrounded by air.  They must learn to feel their body all over again.  So, is swaddling a newborn the absence of freedom?

I don’t know if we can think in terms of freedom when we think of swaddling.  In the west we think of freedom as the ability to do whatever you want.  But in traditional Asian countries like Japan, freedom takes on a different quality.  Freedom is found within forms.  In other words, you find freedom by conforming to the particular “kata” or forms of an activity.  In Kendo, Japanese sword fighting, you first learn the kata.  You learn how to do a particular move.  That’s where the freedom is.  In Shodo, the art of brush writing, you learn the mechanics of how to hold and move the brush.  There are specific ways to do this.  It’s not random or arbitrary.  It’s not different than learning any art or sport.  There are forms that need to be respected.  Just as in baseball a pitcher does not play the role of third base.  The pitcher needs to know the forms of the pitcher.

Japanese see this attention to the details of the forms, learning the forms perfectly, as freedom.

Swaddling is not limited to infants.  We see examples of it in the animal world, too.  Chicks, once out of the confines of the egg, continue to be sat upon by the mother hen.  Imagine the weight and heat the chicks must feel upon them, under their mother.  They are confined to the nest for the next several days if not weeks after hatching.  They stay close and the huddle around the mother.

We think that, as adults, freedom of movement is the ultimate expression of freedom.  Freedom may mean to some the ability to go anywhere you want at any time, unencumbered.  Buddhism has a different perspective on what it means to be free.  The Buddha, for example, did not attain freedom by traveling all over the place but by being totally still under the Bodhi tree for 8 days.  What did freedom look like to him?

It may seem counter-intuitive to think of zazen, seated meditation, as a form of freedom.  How is it that we can find freedom in a totally still posture?  Again, from an outsider’s perspective zazen may appear to be totally constraining and limiting.  What’s happening when we are meditating that has been described by the sages as liberation?

My Zen teacher, Dai-En Bennage Roshi, compared the practice of mindful meditation to making a cup of tea.  Most people in the U.S. don’t cover their tea when they’re brewing a single cup.  They just put a tea bag in a cup, let it sit for a few minutes, while they watch the steam rise.  That steam rising, however, is like the chi or energy of our practice and of our life.  If you put a lid over the cup of tea, what happens to the steam?  It has no recourse but to go inside the tea leaves, bringing about the best cup of tea.  Mindfulness is like the lid on the tea pot.  Mindfulness helps the energy of our life not dissipate into the atmosphere, but be utilized to the utmost by what it is directed toward.  In the case of meditation, our mindfulness could be directed toward our body, feelings, thoughts, or the environment.  When we direct the energy of life into our perceptual field, then we feel a part of that field, we feel that we belong to that which we are aware of, just as a toddler feels its belonging to his mother, or to himself.

This is intimacy – a feeling of closeness to yourself, to your environment, and to the people in your environment.  This, I feel, is what the swaddle facilitates for the infant.  It brings them back to themselves.  Their arms and legs quit flailing.  They’ve found home in the present moment, in themselves, and in their world.

But we adults need to be swaddled just as badly as toddlers, when you think about it.  Our swaddling just looks different.  When we are not swaddled – from a spiritual perspective – our minds run amok.  They go everywhere.  They flail just like the arms of the toddler.  Our minds grasp after stuff we think we need.  Or we push away what disagrees with us.  We don’t think about the consequences of our action.  We go mindlessly from one thing to the other, not grounded in our self or in our world.

Zen meditation is said to be the harmonizing of body, speech, and mind.  We harmonize our body, the foundation, by being still.  We harmonize our speech by not moving our mouth.  It’s said in Zen that as soon as we open our mouths and speak, we are not in harmony with reality.  This is because words don’t accurately grasp the reality of our life.  When body and speech quit moving, our mind also becomes still and quiet.  We are able to see reality from a different perspective than our ordinary waking consciousness.  This is true freedom – the ability to stretch our mind beyond its capacity so that we return to our self and return to the universe within us.  We are not lacking.  But we only know this unless we do the equivalent of swaddling our own mind.  Anything good comes from a mind that has been stilled.  Returning to that stillness is essential for all adults – regardless of religious beliefs or practices.  It’s not about doing it right, but about claiming our inheritance as a human being.

Daishin Eric McCabe is a Buddhist monk. He teaches Soto Zen philosophy, mindfulness meditation, yoga, and calligraphy to people of all walks of life and spiritual paths. He was ordained in 2004 and given permission to teach in 2009. He is fully ordained in the Soto Zen tradition and is a recognized teacher both in the Association of Soto Zen Buddhists and in the Soto Zen Buddhist Association. Daishin undertook a 15 year mentorship with Abbess Dai-En Bennage of Mount Equity Zendo, located in rural central Pennsylvania. During this time he trained at various Soto Zen Monasteries in Japan. In France he trained with Venerable Thich Nhat Hanh, practiced in California at Tassajara Zen Mountain Center, and with Rev. Nonin Chowaney at the Nebraska Zen Center. He is a certified hatha Yoga teacher through Integral Yoga. Daishin has four years experience attending the spiritual and emotional needs of patients, family, and staff in a hospital setting, and three years experience giving spiritual direction and counsel to clients with mental health and substance abuse issues. He has ten years experience as a Guest Teacher and speaker at Buddhist meditation retreats, yoga centers, colleges, and multi-faith gatherings. Daishin studied at Bucknell University where he received a BA in Religion and Biology in 1995. He completed 5 units of Clinical Pastoral Education at Wellspan York Hospital in August of 2014, where he worked as a Chaplain in Behavioral Health, and in 2015 was granted by the Board of Chaplaincy Certification Incorporated the equivalent of a Master of Divinity. Prior to chaplaincy he taught meditation and yoga for two years to clients at White Deer Run, a drug and alcohol rehab in central PA. He presently teaches yoga at Broadlawns Medical Center to patients receiving mental health care. Daishin presently resides in Ames, Iowa with his wife and family. View more posts