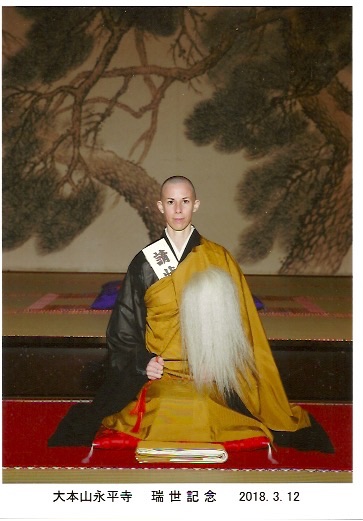 Sara Jisho Siebert is a Soto Zen Buddhist priest who was led to Buddhism by the suffering around her and in her work to prevent domestic and sexual violence.  Her path to understand suffering and joy led her to Los Angeles – where she first met her teacher, Gengo Akiba Roshi, then to Papua New Guinea, Liberia, Sierra Leone, Uganda, monasteries in Japan, and Haiti.  At present she works for Beyond Borders, an organization working in Haiti, committed to preventing violence against girls and women and ending child slavery.  She is recognized as an International Zen Teacher (Kokusaifukyoshi) by the Soto Shu.

Eric Daishin McCabe is a priest in the Soto Zen school of Buddhism in Japan.  With a keen interest in Ecology and the World’s Faith traditions, he received his B.A. in Religion and Biology at Bucknell University in 1995.  His early mentors were Prof. John Grim and Mary Evelyn Tucker with whom he studied Interfaith Dialogue with a special interest in Indigenous lifeways.  He subsequently apprenticed with Patricia Dai-En Bennage Roshi of Mount Equity Zendo for 15 years.  During this time, he trained at several Soto Zen Monasteries in Japan as well as in France with the Venerable Thich Nhat Hanh.  In 2013, he continued training in the art of spiritual direction and Chaplaincy at Wellspan Hospital in Pennsylvania.  He is recognized as an International Zen Teacher (Kokusaifukyoshi) by the Soto Shu.

At present Jisho and Daishin teach at the Pure Land of Iowa, Cedar Rapids Zen Center, and where ever they are called. They live with their son, Malcolm, in Ames, Iowa.