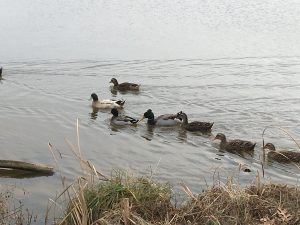 Recently I had the opportunity to visit my family in Maryland.  This was my first time back to the East coast since the birth of Malcolm, my son, four months ago.  Many friends and relatives came to my parent’s home to see Malcolm including a Zen student that I have been working with for a number of years.  The following is a story about an encounter my student and I had with some geese around the lake.

My parent’s home backs on to a lake, so we decided to take a walk around the lake.

The walk was dotted with conversation and silence.  We spoke sharing how things were going for each of us, and we also just walked without saying anything, but listening to the birds on the lake and feeling the soft and somewhat muddy ground beneath our feet.  I recalled how in my youth there were more mallard ducks than there were geese.  Now the ducks are nowhere to be found and there are almost all geese.

We took a moment to rest from our walking and sat down on a bench looking over the lake, with a small hill rising behind us.  I noticed a pair of adult geese and four goslings following their parents around just on the bank of the lake.  I recalled the many times, despite signs saying, “don’t feed the wildlife,” how people would feed stale bread to the ducks and geese so much so that they would approach lake pedestrians looking for handouts.  (Apparently it’s not good to feed wildlife because they become too dependent on people for their food, or so I was told.  I don’t know if that is true or not.)

At one point these geese and their goslings decided to move off of land and press into the lake waters for a swim.  They walked together as a group, one-by-one waddling their way into the water, bobbing up and down.  Once on the water they moved in a circular pattern for about two minutes until one of the adult geese decided to climb out of the lake and walk toward us.  I thought perhaps that the goose was looking for handouts as it stretched its long neck out and then began to honk in the direction of our bench.  What else could a goose be wanting other than food from humans?

The goose continued to honk in our direction when all of a sudden two goslings came running quickly in a waddle down the small hill just behind the bench where we were sitting.  They joined the adult and then rejoined the larger group that remained waiting for them in the lake waters.

As the two goslings appeared in my vision, it slowly dawned on me that the adult goose was not looking for handouts at all.  He or she was, like all parents, greatly concerned about the whereabouts of her or his children, calling to them, and telling them to come closer.  In this instance, I learned a lesson from geese:  My perception of reality is not always the right one.  I thought the goose was after food.  From the goose’s perspective this was clearly not the case.

While sitting on the bench and sharing my discovery with my student, she made a parallel between my breakthrough and the teachings of Zen Master Nagarjuna, a pivotal teacher in the Zen Buddhist tradition.   Nagarjuna taught that our concepts of reality are not reality.  Reality cannot be captured in words or thoughts.  What we think about life is never the actual experience of life.  Life is never in our thoughts about it, but in the actual experience of living it in the present moment.  How wonderful that the honk of a goose can awaken me to reality as it is!