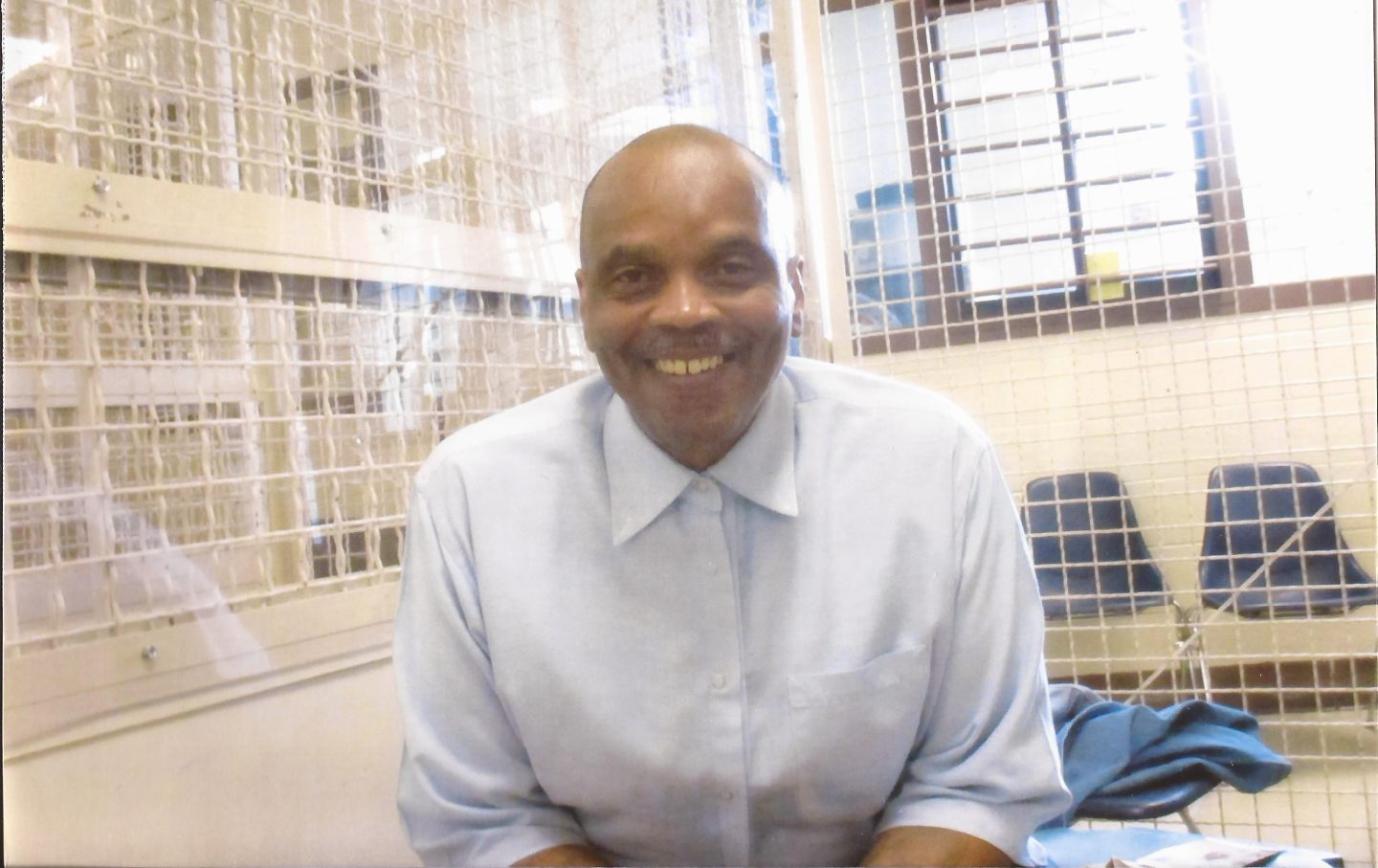 It’s long past time for California Governor Gavin Newsom—and the mainstream media—to take up the cause of a man who is almost certainly innocent of the crime that landed him on San Quentin’s death row.

Jarvis Masters seen through the window of his cell on death row. (Tom Gogola)

The California Committee on the Revision of the Penal Code released an advisory report in November 2021 that called for the state to end, once and for all, a capital punishment regime that hasn’t seen an execution at San Quentin State Prison since January 2006, when Clarence Ray Allen was executed at the age of 76. He went to the gas chamber just a month after the state killed the Nobel Prize–nominated Crip founder Stanley “Tookie” Williams. Both men had sought and been denied clemency from then-Governor Arnold Schwarzenegger.

Since then, the state has replaced its gas chamber with a lethal injection machine that has never been used, even as prosecutors from around California continue to seek the death penalty. The advisory report, ordered by the state legislature, is a forthright rebuke to a state capital punishment regime under which 697 inmates are currently condemned—many of them mentally incompetent, and some on the brink of insanity owing to years of being locked up in the nation’s largest death row. The report focuses on, among other issues, the fact that there are inmates on death row who are likely innocent of the crime that landed them there.

Masters’s legion of supporters includes American Buddhist icon Pema Chodron and the writer Rebecca Solnit, who recently posted a short piece online after a visit with Masters around Christmastime. As Solnit notes in her posting, Masters’s prison writings are also cited in the last book by the late bell hooks.

Solnit and others in solidarity with Masters are calling on Governor Gavin Newsom to take heed of the recent report, which highlights the racial disparities facing Black inmates on death row, and, among other reforms, calls for the state to retroactively enforce a 2020 state law to reduce such disparities in the state prison system.

The report argues that even if Newsom won’t end the death penalty outright, he should take immediate steps to start commuting the sentences of the condemned. There’s currently a moratorium on the death penalty instituted by Newsom in 2019 that will remain in effect as long as he is governor. But, without commutations, Newsom’s successor could resume executions when he leaves office.

The penal-code revision report was released in November; in August, media antihero and death row inmate Scott Peterson’s capital conviction was commuted to life without parole, thanks to a dogged and years-long effort by his attorneys. Peterson was transferred to another California prison, and his resentencing was above-the-fold news on CNN’s webpage. Peterson issued a statement saying that he believed the commutation was one possible step along the way to his eventual freedom.

I encountered both Masters and Peterson, in radically different contexts, during a rare media tour of the various death row facilities at San Quentin in late 2015. I spoke with Masters for about 20 minutes through his cell window on the main death row tier at the facility, where the bulk of the condemned are housed. The most violent death row inmates are held in a unit that’s creepily called the Adjustment Center, one

of the deepest carceral holes in the nation, while death row inmates who’ve demonstrated good behavior are housed in a tier which has access to a rooftop basketball court.

I’ll never forget that day, and I’ll never forget meeting Masters, who lit up in a big smile when I approached his cell and told him that I was bringing greetings from New Orleans. A friend in the Crescent City was the first to bring his two prison books to my attention, his memoir That Bird Has My Wings and a collection of prison writings called Finding Freedom.

He was at work on another book, he said, and we talked about writing and about Buddhism. Masters showed me his writing platform and the special hat he wore while he was at work, and told me that unlike when he had been housed in the Adjustment Center, he’d recently been permitted to write with an intact pen instead of just the ink tube. Before too long, another reporter started shoving her way in to talk to Masters—having failed to persuade Polly Klaas’s killer, Richard Allen Davis, to engage. Other reporters started to gather around, too, and it was soon obvious that none of them knew who Masters was.

But they all knew who Scott Peterson was. When reporters were brought up to the roof to interview inmates there, I noticed that two men in prison clothes on the basketball court had turned their backs on reporters. That was their way of letting us know they wouldn’t be talking to the press. One of them was Peterson, who was convicted of killing his wife and unborn child during a 2004 boating trip somewhere in San Francisco Bay.

Like Masters, Peterson has long claimed his innocence. Unlike Masters, Peterson’s story has been the subject of more than a dozen made-for-TV dramatizations and documentary specials on just about every imaginable television network. Peterson is a good-looking white man who played golf and lived in an upscale area of Modesto, Calif. His wife was beautiful, and the crime was heinous. Masters is a Black man from a rough background in Long Beach who had initially landed in San Quentin on an armed robbery charge when he was 19 years old.

The penal code revision report spells out numerous reasons why the California capital punishment regime is a human rights debacle, and, as Masters’s supporters stress, specifically cites his case in two sections: His case is invoked as an example of racial disparities in sentencing and, critically, it is also highlighted in the section devoted to potentially innocent people winding up on death row. The racial disparities noted in the report extend from inside the walls to a slobbering media establishment that just can’t get enough of Scott Peterson.

Here’s the facts, since they do matter: Masters was serving time for armed robbery when he was implicated in the death of San Quentin correctional officer Dean Burchfeld in 1985. Three people were charged with the crime: Masters, Andre Johnson (who was convicted of actually stabbing Burchfeld to death), and Lawrence Woodard, who ordered the killing.

The three inmates were all said to be part of the Black Guerrilla Family gang. Masters, who was in his cell at the time of the murder, was charged with fashioning the weapon that Johnson used to kill the guard. But that weapon was never found. Master got a death sentence, while the other two men got life without parole. The judge who sentenced the men noted Johnson’s age at the time of the killing (he was 21) as a reason to give him life without parole, and also cited Masters’s criminal history as a factor in sentencing him to death. As Masters’s appeals made their way through the state court system, prosecution witnesses who had fingered Masters at trial went on to say that they lied out of fear of retribution or re-incarceration—and recanted the damning testimony that put him on death row.

Thirty-one years after his sentencing, Masters is still on death row, still proclaiming his innocence and going on the occasional hunger strike to draw attention to his case—and to that of others on death row who have been driven completely insane, never knowing if the day will ever come when they take the walk to the death chamber. In 2014, a federal court ordered the state to build a special psychiatric unit to treat those inmates.

It is long past time for Gavin Newsom and the mainstream media to stop turning their backs on this case. The Biography Channel made a film about Tookie Williams, after all—and he never even claimed he was innocent.

Tom Gogola is an award-winning journalist and a former congressional district staffer in California’s North Bay.

What Does Receiving the Precepts Mean?

What Does Receiving the Precepts Mean? In the article “Teacher Qualities in Soto Zen” I mentioned one of the ways to recognize a teacher is

Teacher Qualities in Soto Zen Zen teachers profoundly influence the way we see the world.  My teacher, Rev. Dai-En Bennage, taught me, through her own