Prison is not just a place in our minds.  In Buddhism we talk about how the mind is our worst prison, but that the mind can also liberate us.  However, there are real prisons all around us... 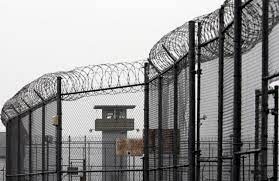 Prison is not just a place in our minds.  In Buddhism we talk about how the mind is our worst prison, but that the mind can also liberate us.  However, there are real prisons all around us, and the existence of these prisons ought to give us great pause, especially in the United States where there are more people incarcerated per capita than any other nation in the world.[1]  The irony of this situation is quite profound when, for many, we identify the U.S. flag with the protection of freedom.  To compound things, we incarcerate black and brown people at a far greater rate than white people for the exact same crimes.[2]  In her book, The New Jim Crow, Michelle Alexander makes a strong case for our present penal system displacing former Jim Crow laws, which itself displaced slavery.

My teacher, Dai-En Bennage Roshi, began her prison ministry in Japan, accompanying one of her teachers once a month to a Japanese all women’ prison.  Her presence was deeply valued by the inmates because she was white and female, and therefore did not carry with her the projections that her Japanese counterparts did.  This made her more approachable for the women.

When she returned to the United States after training for 15 years in Japanese Zen temples, she was invited to teach at Lewisburg Federal Penitentiary, which she did twice a month for many years.  I had the good fortune of accompanying her.  She would tell me, “I don’t judge these men for what they have done.  Society has already done that.  In Buddhism we believe you begin anew from any moment.  I never ask the men what they did to get into prison.  That’s not important to me.  The important thing is that I offer them an opportunity to understand themselves and to change, and that every single person, including the incarcerated, are Buddhas in the making.”[3]

The men would often complain about the noise at all hours, but especially in the late night and early morning when they were trying to sleep. Pointing to her heart she would say, “In zazen, we’re not here to change the noise on the outside, but to address the noise on the inside.”

Prior to Covid I had been going once a month to the Fort Dodge Correctional Facility.   Visiting prison gifts a person with a deep appreciation for the freedom we often take for granted.  When we physically go inside the barbed-wire fence and through the locked doors seeing men in prison uniform we can feel in our body more intimately what it means to be free.

The other evening as I was putting my son to bed the thought popped in my mind that the men incarcerated right now in our country are not able to put their sons to bed.  I felt a deep sense of gratitude for being in my own home, unguarded, and being with my family, able to provide guidance to my son as he grows up.  This is a luxury that I often take for granted.

As we enter the Thanksgiving and holiday season our physical freedom is worth contemplating.

[3] This is not an exact quote but a paraphrasing of what Dai-En Roshi shared in personal conversation to and from the prison.

Shikantaza and the Jhanas

Shikantaza and the Jhanas All art by Daishin See more here. Table of Contents Early Buddhism At the edge of a forest filled with immense

The Heart of the Matter

Healing in Zen Manjushri said, “Go out and bring back one stalk of medicinal herb.” Sudhana left and looked throughout the entire earth, but there

The Gate of Repentance

The Gate of Repentance All my past and harmful karma, born from beginningless greed, hate and delusion, through body speech and mind I now fully