What Does Receiving the Precepts Mean?

One should be mindful at each moment of the ceremony and receive the precepts as one's own.

In the article “Teacher Qualities in Soto Zen” I mentioned one of the ways to recognize a teacher is that they display some degree of contentment. This is not a naïve contentment that ignores the real suffering of life, but one that is born out of what we call “practice.” Now, I’d like to share thoughts on the precepts ceremony and how it connects with the teacher and student within Soto Zen as I have come to understand it. I want to underscore that there are multiple perspectives on what a teacher-student relationship is, depending on who you ask. Here, I draw upon the history of the Soto tradition.*
* I draw upon my understanding of the oral transmission from various Japanese and non-Japanese teachers I have encountered within Soto Zen, particularly those members of the Association of Soto Zen Buddhism, as well as the Gyojikihan or Standard Observances of the Soto Zen School, Volume 1. This is a manual published by Sotoshu Shumucho, the administrative headquarters of Soto Zen in Japan. It is a standard book of ceremonies detailing daily, monthly, and yearly ceremonies, as well as occasional ceremonies.
Read "Teacher Qualities in Soto Zen" Article

While a teacher need not be a priest, but someone who displays some degree of contentment, what follows is referring to a priest as a teacher.  A priest, in Soto Zen, plays a certain role within a temple, and figuring out what that role is, and how a student ought to relate is not always immediately obvious.  It gets complicated when there are multiple teachers, each with their own ideas.  Drawing on history, then, can be illuminative, and bring us into a wider context of what the teacher-student relationship may look like.

In contemporary American culture, a student might decide, after practicing some time with a particular teacher, to receive the 16 lay precepts in a formal ceremony with that teacher.  There may be some preparation for this ceremony such as studying writings by Soto priests on the precepts, sewing a rakusu (abbreviated, smaller Buddha robe), or increasing one’s commitment to practicing with a teacher at their temple.  In my case, I spent several months learning how to sew a rakusu.  My teacher expected that I and all her students would, in receiving the precepts, commit to coming to one sesshin (3-day intensive meditation retreat) a month for a year, as well as the years that followed the ceremony.  Sometimes there were other stipulations as well, such as doing 10,000 bows. 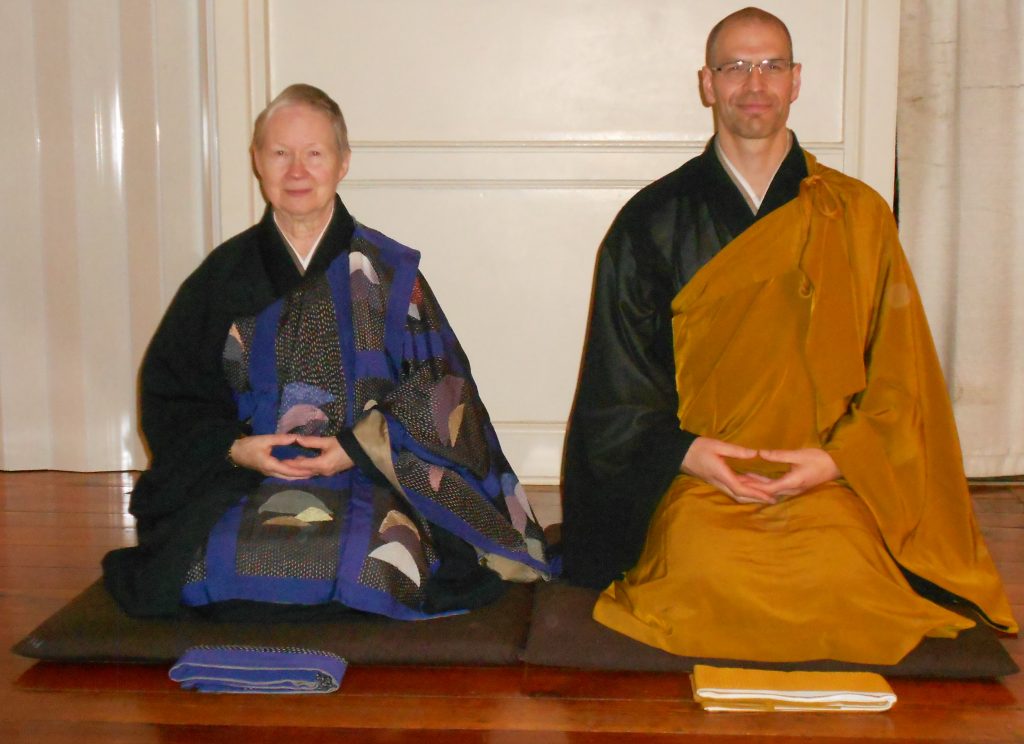 All this is well and good.  Personally, having goals to meet helped me keep focused on practice, and I suspect that is the case for many people.  While I understand why it is done today, historically this ceremony did not cement a formal student-teacher relationship.  Traditionally, receiving the lay precepts never came with an obligation on the part of the student to remain loyal to a particular teacher or sangha.  The lay precepts ceremony, rather, is a commitment to living an ethical life, and is meant to be a vehicle in which the preceptee becomes Buddha.  The ceremony confirms Dogen Zenji’s teachings that zazen (sitting Buddha) and the precepts are one.

Historically, the 16 precepts were conferred upon large groups of people by the cooperation of several priests.  In fact, in Japan this is still done.  In November 2022, the 100th anniversary ceremony of the first Soto Zen temple in North America, Zenshuji, will be marking this great event with a 5-day precepts ceremony as it is done in Japan.  No formal teacher-student relationship is expected prior or after the ceremony.

Moreover, the blue rakusu, commonly associated with receiving the lay precepts, is a contemporary development in Soto history.  It has not been the case that in doing a lay precepts ceremony a rakusu is sewn or received.  In fact, the precepts ceremony as commonly known in American temples today, was derived from a ceremony for a temple family member such as the priest’s wife to receive the precepts.  This ceremony, in many cases, included receiving a (sometimes) green rakusu.  In Japanese society, the wife wearing a rakusu made it clear who lay members of the temple could go to for advice about practice if the priest was not present, or if the parishioner felt more comfortable talking with the priest’s wife.  There may be other reasons as well for the rakusu being donned on the temple wife that I’m not aware of.

We may benefit from acknowledging that some of the early pioneer non-Japanese American Zen teachers have taken certain liberties in changing the tradition when they expected loyalty from a student based on having conferred a rakusu during a precept ceremony.  On the same token, the process of receiving precepts with a rakusu is beautiful and worthwhile if done from a place of choice.  A person may spend a lot of time sewing and devoting themselves to the three treasures and find deep meaning in this course of practice.

My point here is neither to advocate for returning to the tradition nor to stamp approval on these new changes.  In either case, a pledge of allegiance to the teacher is not required in Soto Zen by a lay person.  Committing to practice with a particular teacher in America today, however, is often fused with receiving precepts and a rakusu.  A teacher might require that a student demonstrate commitment to them by receiving precepts in a formal ceremony, but it’s important to keep in mind that, traditionally, this was never the case, that it is a modern change, and that it often confuses the teacher’s role with that of a guru.  Lay students who receive precepts in Soto Zen ought to be encouraged to study and learn from multiple teachers, and not get stuck in one teacher’s approach, nor to feel any obligation to a practice center.  While a student may decide for themselves (or in relationship with a teacher) the extent to which they will commit to a teacher and a Zen center, it need not be tied to receiving precepts.